The City of Willis operates under a council-manager form of government, whereby citizens elect the mayor and councilmembers to make important decisions on policy-related issues. The City Council appoints a city manager who has oversight and management responsibility for the daily workings and activities of the entire city staff in carrying out the directives/policies of the City Council. 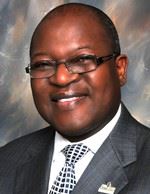 Sheyi Ipaye is a Certified Public Manager (CPM), and a Senior Executive Fellow at HARVARD Kennedy School of Government. Recruited by City Council to transform the city and improve the community’s public infrastructure, He has reorganized departments, streamlined business systems, improved customer service, and elevated the professionalism of his staff through the city’s core values of “Teamwork, Integrity, Innovation, and Professionalism through Excellence”

Previously, Ipaye served as City Manager in Palestine, Glen Heights, and Forest Hill, Texas, where he served for more than three decades. In Forest Hill, he lowered the city’s property tax rate, increased financial reserves, and reduced waste. He supervised construction of Forest Hill Civic and Convention Center, the Forest Hill Memorial Park, and increased police, fire, and emergency medical services to the public. Under his fiscal leadership, the City of Forest Hill’s Insurance Services Office ISO rating improved from a 5 to 3, helping to reduce insurance costs for homeowners and Forest Hill’s General Obligation Bond Rating was upgraded by Standard and Poor’s Rating Service from an “A” to “A+,” a first for the city. The city has consistently received the “Distinguished Budget Presentation Award” from the Government Finance Officers Association (GFOA).

As the Chief Executive Officer in Glenn Heights, he completed a “state of Art” Community Park and improve streets, and water storage facilities for future developments. He earned the reputation as a results-focused “go-to” manager. While in Palestine, he supervised numerous economic development projects including the development of more than two million square feet for a Walmart Distribution Center, construction of a new state-of-the-art water treatment and sewer facility, establishment of the Steven Bennett Park through a $1 million grant from the Texas Department of Wildlife and improvements to the city’s museum, theatre, Convention Center, and downtown development. Additionally, Ipaye successfully developed and maintained a constructive labor-management relationship with the Civil Service Commission.

Throughout his career, he has consistently given back to the community. He is a member of the Lions Club, has served on the Texas City Managers Association’s Nominating Committee, Texas Municipal League Small Cities Advisory Committee and volunteered with the International City & County Manager Association (ICMA), Committee on International Affairs.

Sheyi Ipaye is a strong family man who likes to lead by example. He has been married to his lovely wife Emma for almost four decades. They are blessed with raising five college graduates.

The city manager serves as the council's chief advisor, as well as directs and oversees the day-to-day operations of all city departments and staff. The city manager also prepares the city's annual budget with the assistance of department heads. Both the council and citizens count on the city manager to provide them with complete and objective information, pros and cons, alternatives, and long-term consequences pertaining to various issues under consideration.

Responsibilities of the city manager include: